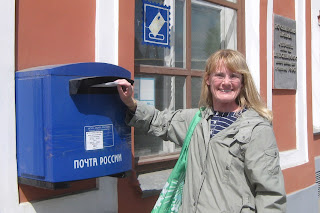 Be careful if you wish for absolute clean and quiet. A little humanity comes wtih the mess and noise. We are used to it, but more important it is what connects us to each other as Americans and makes us willing to go outside our comfort zone to be curious and explore, to accept and welcome. From there compassion grows.

I had one Cultural Visit I did not write about before. We visited a museum of the first female cosmonaut who was born near Yaroslavl.

I grew up on the other side of the ocean from all the celebrations in the then USSR. According to our TV it was not a good thing USSR was first in space. Seeing a picture of the cosmonauts with Nikita Kruschev, arms raised in triumph – over outer space? over the US? – brought back lots of memories of pounding shoes and bomb shelters. It was a long time ago. But it took awhile to process in the present. 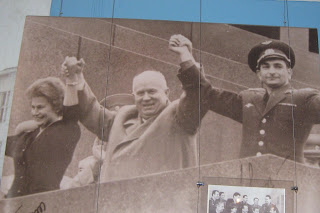 I marveled, too, at how I totally missed a woman going up since I have long supported equal rights. So I checked out distracting events in June of ’63. Governor George Wallace stood in the door of a school to stop integration. Pope John 23 died. A female cosmonaut did not register. Which was really too bad. She has an amazing story of being no one very famous or well trained but ready to work hard.

As much as I was rattled by the post-Soviet era from a distance, the people in Russia right now are living it in two generations. The older remember what they describe as the dictatorship era. Their biggest complaint (to us) is that they could not travel. The younger staff I worked with was in diapers when the USSR broke up. They have not known Communism except as another party in the elections. How will that change the attitude and priorities of Russia in the next 20 years? Fascinating.
Posted by Robin at 3:34 PM 1 comment:

It has taken a while to process this trip. For one thing the two most important events do not have any photo memories. In the various places I worked with children, confidentiality was a factor and no photos were allowed. Also during Russian Orthodox church services there was no photography. So those parts of the trip stay only in my mind and heart. Where they are vivid.

To say we worked in "orphanages" does not cover who we were really with although I guess it is the best description. We did one day at a Senior Center and one with disabled adults. But the bulk of my time was at a shelter for kids had just been removed from their homes due to dysfunctional families. The other days were at a locked down children’s psych ward and a boarding school for kids who were already parentless but the orphanages felt their behavior was so far out of bounds the orphanage could not handle them. They were all kids in tough situations and it is hard to imagine their future as anything but bleak. They were exceedingly well cared for as far as basic need went: clean, sheltered, fed, safe outdoor and indoor areas (albeit old and institutional), but the staff number for the number of kids was minimal. I’m sure somewhere there was counseling and medication, but in general we saw them in groups of up to 25 with only 1 or 2 monitors. In the careful professional way of staff that cannot get too involved, they were told what to do, but no contact was every made physically or emotionally. They longed for individual attention from someone for a few minutes and when it was given, could hardly stand to have it stop.
Posted by Robin at 1:55 PM No comments:

Some number of hours later.....I am am home and doing laundry. Good to be back - more reflections as I make the cultural adjustment back to Panera coffee.
Posted by Robin at 8:45 AM No comments:

Ah the mystery of the missing Sunday! The Eastern church celebrates western Pentecost as Trinity Sunday since the coming of the Spirit completes the Trinity. The west has 2 separate events. Hope you slept OK for wondering...

In the Moscow airport waiting for wheels up for home.
Posted by Robin at 1:42 AM No comments:

At the shelter they had received a load of sand for a building project, and it rained to form two huge puddles so thee was no interesting anyone in Frisbee, a ball or chalk. That completely consumed them until someone found a cat with kittens. It was like the pull the the moon on the tides - no stopping the surge of children. Fortunately Mom Cat got wind of the onslaught and took the family to safely outside the locked gates. Play in the puddles resumed.

Tonight was the perfect culmination to the trip. I stumbled into the local Russian Orthodox church as the service was beginning. Around every post and pillar and icon they had installed 15 foot limbs off the local trees. It was like walking into a new forest. Everyone had bundles of branches and flowers from home and there was a que at the Candle Purchase Window! 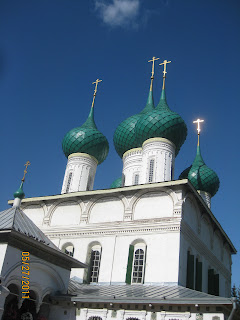 There were 5 guys in hats (also the sign of a Big Event) and one in full Jeweled Chapeau Splendor. There were also 6 others fancy clad clergy, one of whom was whispering directions to everyone including the Very Ancient Most Awesomely Dressed elder. Whenever this Most Big of Biggies stood anywhere he had to have a rug under him so they were constantly laying down and rolling up the rugs. Everyone was in greenest/goldest of greens/golds. Our CCS director told us it is Holy Trinity Sunday, but I can find no calendar that explains why it is not Pentecost.

They made the incense at St Mark's look like a puff of air freshener.

The usual crowd of 10-12 had swelled to 70 or so. And most amazing of all there was congregational singing! I was hoping for "Holy, Holy, Holy" but whatever it was everyone knew the words. Because there are no pews, let alone pew racks for the hymnals. This is the first time I have seen a corporate action in a Russian Orthodox Church. There is lots of active involvement in crossing and bowing at random times and very seldom at the same time, but no response from priest to congregation.

The altar guild is usually scurrying around putting out Teeny Candles before they become hard to clean wax drippings. Today even they were shooed out as everyone processed out to the entrance (my escape route) and back in. I left after an hour as they began to read the Gospel. It was so wonderfully understandably holy even the only word I recognized was "thank you." I guess that's a pretty good one to know.

So Thanks Be to God for whatever day it was - it was a great one. Signing off for home -
Posted by Robin at 9:27 AM No comments:

Email ThisBlogThis!Share to TwitterShare to FacebookShare to Pinterest
Labels: Week 3

I know you are wondering who won the Russian "Factor A" - AKA "X-factor" for the Brits and "American Idol" for the US. It was Sergi who was not the adorable 16 year old we had rooted for. Judges were bribed, I'm sure. But the suspense is over, and I can come home.

Which I will do in about 24 hours - leaving at 7am Sunday, trekking back to Moscow, on to JFK and locating my lost luggge at Ohare where I'd like to think they will speak English at 11:25pm on my Second Sunday. I hope I can find something better to watch inflight than Ice Age II AGAIN.
Posted by Robin at 9:55 PM No comments:

Robin
Retirement is not sitting still - it is only doing what you love! I divide my time between Nana-dom for 5 Grandblessings, pastoral work St Mark's Episcopal, and writing stuff I hope gets published.